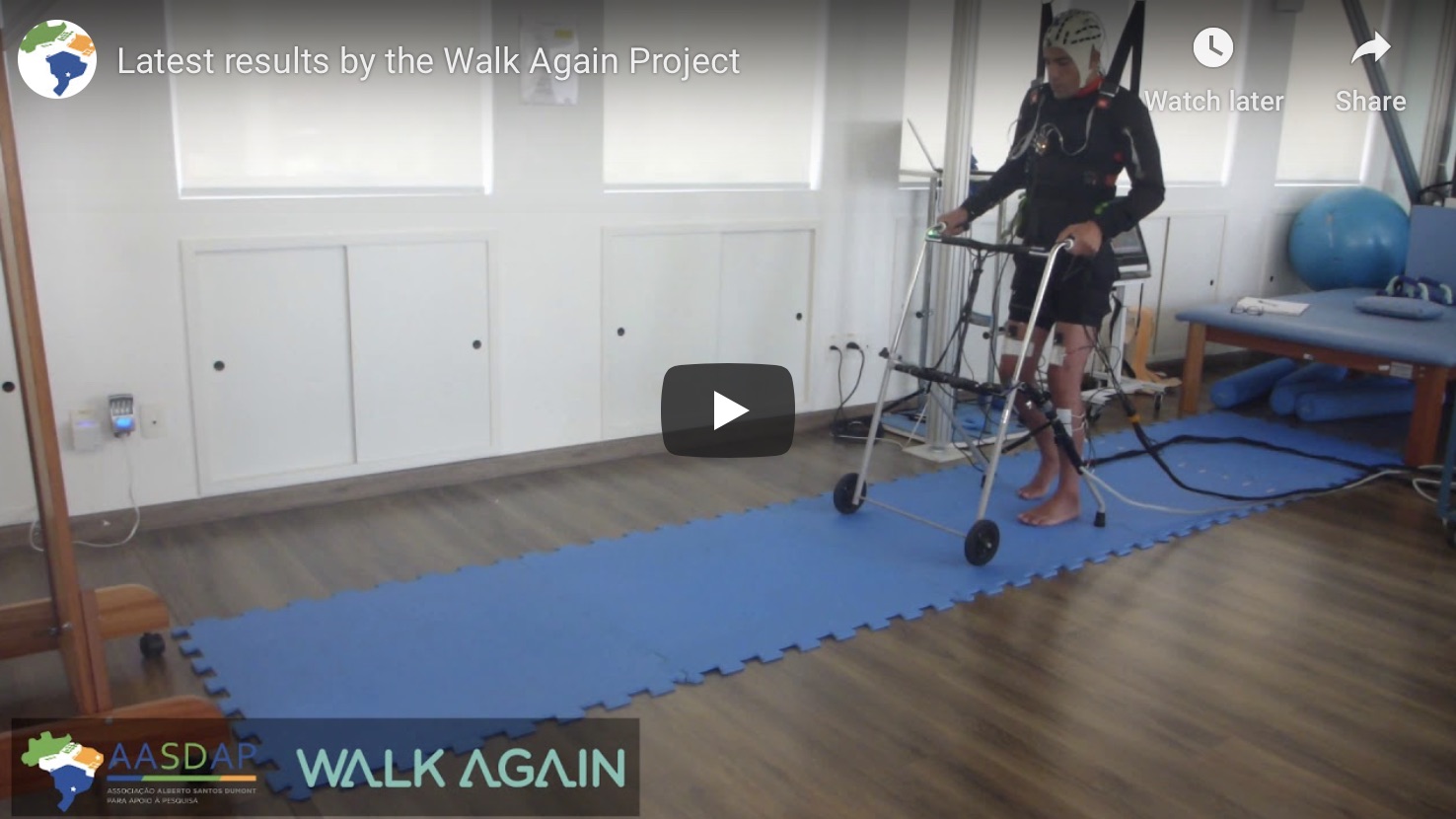 Two patients with long-term paralysis have walked over 4,500 steps with the help of a walker, as part of a new pilot study led by brain-machine interface pioneer Dr. Miguel Nicolelis at Duke University, in North Carolina, USA.

The program involved the employment of a fully non-invasive brain-machine interface and functional electrical stimulation.

The brain-boosting program kicked their damaged nervous systems back into action, restoring some neurological recovery in both patients along with bladder, bowel, and sexual control.

Both patients also experienced improvements in their cardio health and a drop in resting heart rate.

This video about the project, which was posted on the AASDAP YouTube channel, shows how the neuro-rehabilitation protocol worked.

“Our hypothesis is that, after a spinal injury, some spinal cord fibers may have survived, but they may not have been activated for years,” said study author Solaiman Shokur.

“Our system makes it possible to stimulate them again,” he added.

“We believe that combined brain and spinal cord plasticity are essential agents in our study,” the team said.

“By urging the nervous system to health itself, it’s clear that partial neurological and functional recovery can be induced in chronic spinal cord injury patients,” the team added.

The study was funded by the Brazilian Financing Agency for Studies and Projects and the Brazilian Ministry of Science, Technology, and Innovation.

The Alberto Santos Dumont Association for Research Support (AASDAP) is a private non-profit institution created in April 2004 to manage public and private resources for the implementation of social projects and scientific studies.

The study is published in Scientific Reports.

Congratulations to Tom on his huge achievement, completing the Ultra-Trail Kosciuszko 100km marathon in just over 23 hours, and for reaching his fundraising target and raising over $5,000 for SCI research. Tom set off in sub-zero temperatures and not only faced the challenging…
END_OF_DOCUMENT_TOKEN_TO_BE_REPLACED

A stunning day in Sydney for the annual LAGS Golf Day in support of SpinalCure Members of the Lloyd’s Australia insurance and underwriting community enjoyed a glorious morning on the greens at Concord Golf Club, followed by lunch in the…
END_OF_DOCUMENT_TOKEN_TO_BE_REPLACED

Thrilled to have SpinalCure community ambassador Dean Martelozzo feature as the cover story on the summer edition of Link – Australia’s premier national disability magazine. Dean became a paraplegic in 2011 as a result of a snowboarding accident in the…
END_OF_DOCUMENT_TOKEN_TO_BE_REPLACED

Sydney, 6 December 2022 Today, Comedian and Presenter Tommy Little handed over a cheque for $103,520 to Project Spark, a partnership between Neuroscience Research Australia (NeuRA), SpinalCure and Spinal Cord Injuries Australia that has the potential to improve the lives…
END_OF_DOCUMENT_TOKEN_TO_BE_REPLACED

Our heartfelt congratulations to Associate Professor Marc Ruitenberg from the University of Queensland’s School of Biomedical Sciences on being awarded a prestigious Churchill Fellowship. Dr Ruitenberg and his team are using the latest advances in single-cell and spatial sequencing technologies…
END_OF_DOCUMENT_TOKEN_TO_BE_REPLACED