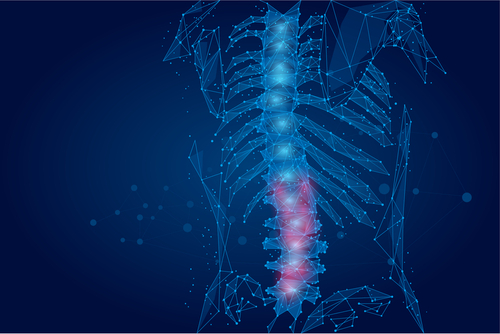 For decades, spinal cord injuries have remained one of the hardest injuries for scientists to treat because nerves in our spinal cord have a limited ability to repair. But a new study from Northwestern University in the United States has shown that injectable ‘dancing molecules’ might help heal spinal cord injuries, writes Tom Elphick, SpinalCure Community Ambassador

In the study, published November 12 in the journal Science, researchers injected a gel into tissues surrounding the spinal cords of paralysed mice. Four weeks later, the mice regained the ability to walk.

This discovery hinges on the magic of what the researchers call ‘dancing molecules’.

How the molecules work

These ‘dancing molecules’ are held in a gel substance that imitates the normal environment of the spinal cord.

The molecules move around the gel substance and are even able to jump out of the gel to attach to receptors on the neurons. This attachment generates a signal that tells the neuron to begin healing itself.

After 12 weeks, the materials in the gel substance break down and are absorbed by the neurons in the body. They leave no waste products behind.

This research is one of the most exciting innovations in spinal cord injury rehabilitation because it could allow scientists to repair spinal nerves without invasive techniques that could injure the spinal cord further.

There is the potential that this new therapy is not going to be the ‘silver bullet’ that cures spinal cord injuries.

Keep in mind that a spinal cord injury is still a massive trauma to the body. Other therapies such as physical therapy or neurostimulation might still be needed as part of ongoing rehabilitation.

We won’t know how successful this new therapy truly is until human trials are started. What works in mice doesn’t always work in humans. That’s why we need to do more studies to look at the possibility of this therapy working in humans as well as the safety.

Researchers are looking for regulator to be able to begin use in humans with the hopes that we will begin to see the healing of spinal cord injuries.

“We are going straight to the FDA to start the process of getting this new therapy approved for use in human patients, who currently have very few treatment options” said Northwestern University’s Samuel I. Stupp, who led the study.

Safety and effectiveness will be evaluated in humans to guide future research for the treatment of paralysis. Stupp also believes that the underlying discovery could treat other diseases such as neurodegenerative diseases.

“The central nervous system tissues we have successfully regenerated in the injured spinal cord are similar to those in the brain affected by stroke and neurodegenerative diseases, such as ALS, Parkinson’s disease and Alzheimer’s disease,” Stupp said. “Beyond that, our fundamental discovery about controlling the motion of molecular assemblies to enhance cell signalling could be applied universally across biomedical targets.”

In Australia, we will need to wait for TGA approval before this therapy can be used in humans but these initial results give us great hope for what the future holds in store.

At SpinalCure, we’ll be keeping a close eye on developments.

The team at Billabong’s Australian office recently held a bake sale to celebrate what would have been a birthday for their dear late friend and colleague of 30 years, Marlene Wills.  Together, the team at Boardriders Inc (which owns Billabong),…
END_OF_DOCUMENT_TOKEN_TO_BE_REPLACED

Professor Simon Gandevia is one of the world’s leading neuroscientists, and is the Deputy Director of NeuRA and Senior Principal Research Fellow, NHMRC. He is also the Study Lead for the eWALK trial, funded and initiated by SpinalCure, along with…
END_OF_DOCUMENT_TOKEN_TO_BE_REPLACED

For decades, spinal cord injuries have remained one of the hardest injuries for scientists to treat because nerves in our spinal cord have a limited ability to repair. But a new study from Northwestern University in the United States has…

We are excited to announce that Dr Camila Quel de Oliveira has won the Spinal Research Institute’s Spinal Cord Injury Research Writing Prize 2021. Her article discusses her SpinalCure-funded research on the use of robotics to improve arm and hand…
END_OF_DOCUMENT_TOKEN_TO_BE_REPLACED

Alex loves mountain bikes—he was mountain-biking when he injured himself two years ago at age 16. He was in year 11 at school. As Alex waited for help, a friend called his mum Karina and held the phone to his…
END_OF_DOCUMENT_TOKEN_TO_BE_REPLACED