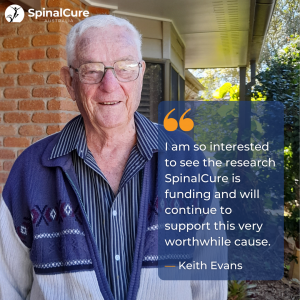 At 87 years old, Keith Evans was inspired to make his first donation to SpinalCure after reading ‘Penguin Bloom’. The Bloom’s honest true story of how their world is turned upside down after a near-fatal accident leaves Sam paralysed. Upon speaking to Keith, we found out that he had a remarkable story of his own…

The story begins on January 1, 1949. Keith, aged 14, was enjoying the summer break from boarding school with a day out at Dee Why Beach, Sydney.

After diving into the children’s swimming pool, the next thing he remembered was sitting next to a man on the side of the pool, who was asking if he was alright. Keith didn’t remember being helped out of the pool and was concerned that something wasn’t quite right.

“I was unable to turn my head properly,” Keith recalls.

As a precaution lifesavers sent him by ambulance to Manly Hospital. No X-rays were taken and he was sent home, diagnosed with a sprained neck.

Three weeks of physio followed, and despite their apprehensions, Keith’s family were encouraged to proceed with a planned trip away to Sussex Inlet.

Fortunately, a doctor happened to be staying there at the time and took his father aside one afternoon. He questioned why Keith couldn’t turn his head to the side, or up and down. After learning about what had happened, he desperately encouraged the family to return to Sydney and seek a second opinion.

Back in Sydney, Keith’s local GP ordered an X-ray which finally revealed he had a broken and dislocated neck: C1 and C2 were fractured in 3 places.

“Quite remarkably there was no damage to my spinal cord, due no doubt to the dislocation”, Keith explained. 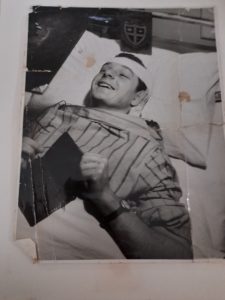 “I was admitted to Royal North Shore Hospital (RNSH), packed in-between sandbags and put in a traction with a 7 ½ lb weight to remove the dislocation”, which took 5 weeks.

He was then put in a plaster cast from his hips to the back of his head, sent home and encouraged to live as much of a ‘normal life’ as possible.

Unfortunately for Keith the bones in his neck failed to knit and an operation was planned. This was the first of its kind by leading Orthopedic Surgeon at the time, Dr. A. R. Hamilton, who Keith describes as his saviour.

On the 18th May 1949 at RNSH, Keith underwent a staggering eight and a half hours of surgery to wire and fuse the broken pieces of atlas and axis in his neck together, with bone from his pelvis.

“It was touch and go for a few weeks following surgery due to post-operative complications, but things eventually began to improve.”

​​For 6 months, 14-year-old Keith remained bedridden in hospital and was strapped into a full length plaster half cast. His mother would visit him almost everyday.

He recollects how he used to have a mirror above his head to be able to complete leather work, how he would play chess with one of the nursing sisters, listen to the radio or read with a pair of recumbent glasses to pass the time. The highly respected Dr. Hamilton and his ‘entourage’ were regular visitors, particularly in the weeks after the operation.

Keith admits to finding it hard after leaving hospital 5 months later, where he says he was thoroughly spoiled and looked after.

“My mates at school didn’t understand what I’d been through and how difficult it was for me to ‘come back to life’.”

Despite the restricted rotational and vertical movement in his neck, Keith describes himself as “alive and kicking, and virtually living a normal life.” He was able to return to school and, “two years later I was in the first X1 and captain of the swimming team.”

He went on to attend university and worked in manufacturing, warehousing and distribution, and spent the last 10 years of his career as Managing Director for a transport company.

Keith has enjoyed a married family life with children and retired in 1994; his time has since been spent travelling, playing golf and bridge. Today he lives in Brisbane and still considers himself extremely fortunate not to have sustained damage to his spinal cord all those years ago.

The story of Sam Bloom reminded Keith of just how lucky he was to escape a major injury with only minor consequences. He feels compelled to donate to help find ways to give better lives to others, who might not be as fortunate as he has been through life.

It is thanks to generous supporters like Keith that a cure is within reach. We have several human trials currently running, and every donation helps fund or expand these trials. Funding is the major hurdle in getting life-changing treatments to people with spinal cord injuries.

Thank you Keith for your generous support!

Would you like to tell us about why you give to SpinalCure?

We’re always looking to profile our generous supporters, so please email us at [email protected] – we’d love to feature you too!

Congratulations to Tom on his huge achievement, completing the Ultra-Trail Kosciuszko 100km marathon in just over 23 hours, and for reaching his fundraising target and raising over $5,000 for SCI research. Tom set off in sub-zero temperatures and not only faced the challenging…
END_OF_DOCUMENT_TOKEN_TO_BE_REPLACED

A stunning day in Sydney for the annual LAGS Golf Day in support of SpinalCure Members of the Lloyd’s Australia insurance and underwriting community enjoyed a glorious morning on the greens at Concord Golf Club, followed by lunch in the…
END_OF_DOCUMENT_TOKEN_TO_BE_REPLACED

Thrilled to have SpinalCure community ambassador Dean Martelozzo feature as the cover story on the summer edition of Link – Australia’s premier national disability magazine. Dean became a paraplegic in 2011 as a result of a snowboarding accident in the…
END_OF_DOCUMENT_TOKEN_TO_BE_REPLACED

Sydney, 6 December 2022 Today, Comedian and Presenter Tommy Little handed over a cheque for $103,520 to Project Spark, a partnership between Neuroscience Research Australia (NeuRA), SpinalCure and Spinal Cord Injuries Australia that has the potential to improve the lives…
END_OF_DOCUMENT_TOKEN_TO_BE_REPLACED

Our heartfelt congratulations to Associate Professor Marc Ruitenberg from the University of Queensland’s School of Biomedical Sciences on being awarded a prestigious Churchill Fellowship. Dr Ruitenberg and his team are using the latest advances in single-cell and spatial sequencing technologies…
END_OF_DOCUMENT_TOKEN_TO_BE_REPLACED