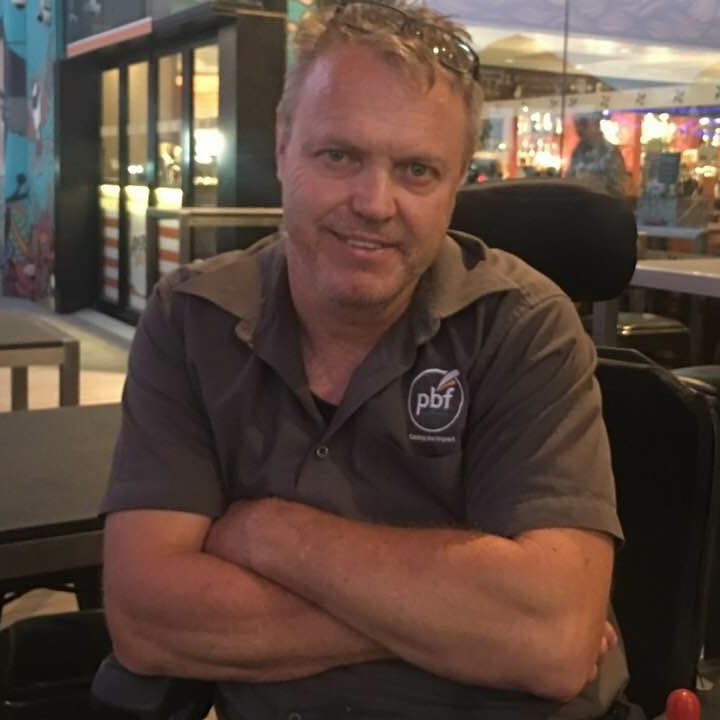 From a young age, Symon loved all things sports. He became a P.E. teacher in Kalgoorlie and when he wasn’t teaching or coaching, he was playing sports. Everything he did, from eating to recovery, revolved around being in peak condition.

The accident that changed his life happened on a hot day in January 1994. He was teaching in Mandurah, a small town just south of Perth and was riding his bike to work one afternoon when he was hit by a distracted driver in a large SUV.

In trying to brake he went through the side window then somersaulted over the vehicle, landing on the road. The helmet saved his brain and the sunglasses saved his eyes but he was sustained multiple injuries

Wonderful and caring people surrounded him, shaded him and redirected traffic for the 45 minutes it took for an ambulance to arrive. He was take to Royal Perth hospital where a very skilled plastic surgeon gave him more than 350 stitches in his face and neck, reset his broken jaw, and stitched in his bottom teeth.

An MRI located a spinal haematoma bleeding straight into his spinal cord. Initially this left him with a T1 complete spinal cord injury with developing syringomyelia. At just 24 years old, he had a great job, lots of friends (including girlfriends), played lots of competitive sports and loved life. With his new injuries he felt that was all in the past.

He was in bed for two weeks before the bleeding stopped and he was hoisted into a wheelchair. Still optimistic, he was certain he would recover. But over the next month the paralysis remained. He watched others get out of bed and walk out of the hospital, but he just moved rooms. To a chronic one, with others that will also never walk again.

At six weeks he received the news that he would not recover any function. The vertebrae were fine but the cord was like ‘potato mash,’ filled with fluid. Everything was different, everything was harder. Nine months later he woke up with a completely numb right arm. His strength and coordination in his preferred arm was gone and he was suddenly a partial tetraplegic.

Shortly after his accident, his sister took him to Stewart Yesner’s house to attend the first meeting of The Australian Spinal Research Trust (ASRT), which later changed its name to SpinalCure Australia! During the meeting at Stewart’s house, Simon met many people in chairs and their loved ones and was sold on the concept of raising funds for the ASRT, to find a cure, with the hope that someday he might walk again.

Initially he was not in the position to do anything so he concentrated on learning about this new lifestyle. Navigating a manual wheelchair, he got a new car with a wymo hoist on the roof, did some additional study, joined a gym and got some volunteers to help him.

Twelve months after the accident he was back teaching. A letter he wrote was sent to all catholic schools in WA, asking them to hold a free dress day with gold coin donation for ASRT. He spent hours driving to schools, giving talks to the students. By the following ASRT meeting he had raised tens of thousands of dollars!

He and his wife have been involved in many fundraisers and charities since then, raising much needed funds for not only ASRT but other areas of spinal research.

Now he works for the Paraplegic Benefit Fund as injury prevention manager where he organises education programs with the local SCI community. He remains very passionate about reducing the number of traumatic spinal cord injuries as well as reducing SCI chronic issues.