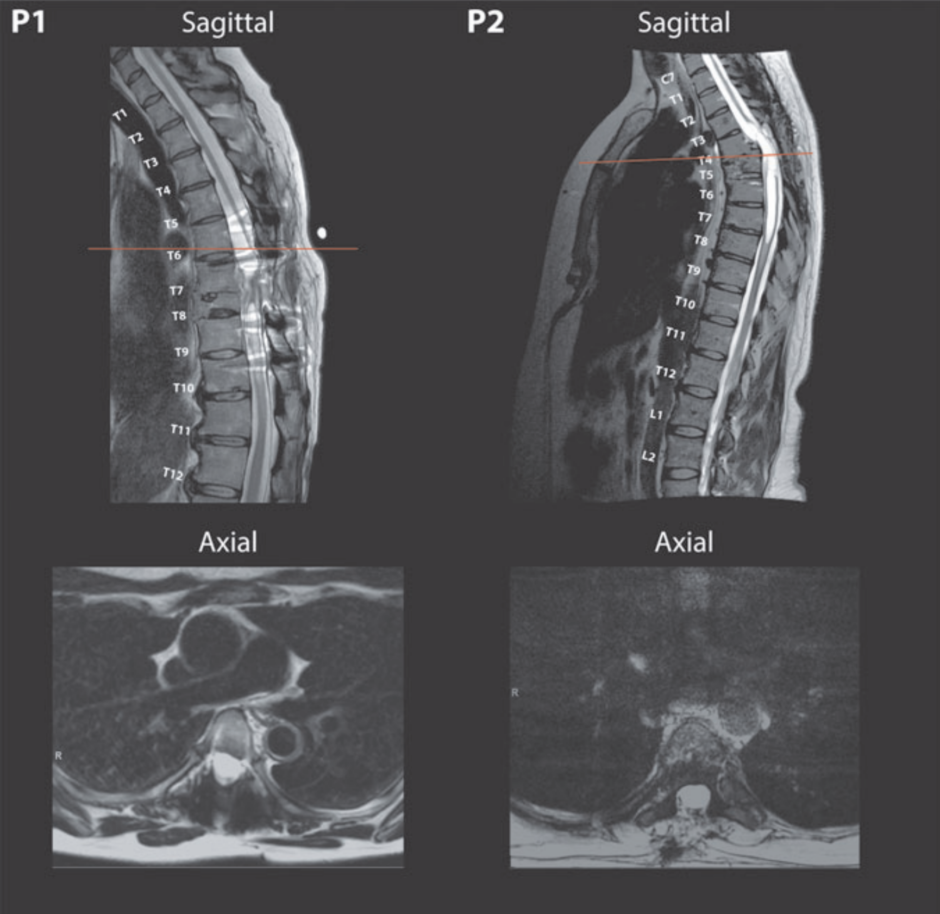 University of Minnesota researchers are aiming to treat 100 volunteers with epidural stimulators in their E-STAND clinical trial. They recently published early results of the first two patients.

And it’s good news for everyone with a spinal cord injury (SCI) who isn’t fit, young and doing lots of exercise.

Two ladies, 48 and 52 years old and 5 and 10 years post injury, both with motor-complete SCI, have regained some leg movement and improved bowel function while the stimulator is on. One of the patients has also seen a return of blood pressure stability and sexual function.

This is further validation of SpinalCure’s commitment to introducing spinal cord stimulation research to Australia as soon as possible. The levels of recovery seen in this and other published papers are life changing and worthy of significant investment, particularly by government as they shoulder much of the burden of the huge economic cost of SCI.

The two middle-aged US women, who were paralysed from spinal injuries at least five years ago, regained some movement after a device was implanted to deliver spinal cord stimulation (eSCS).

“We chose to disseminate our novel discoveries at this early stage as the significant motor and autonomic findings have immediate implications” for general perceptions about the therapy, the January 22 study report in the Journal of Neurotrauma says.

“We know patients want new therapies out and we think this may be a viable first step,” Dr. David Darrow, lead investigator with the study told ABC’s 5 Eyewitness News.

“If we can deliver a 10 percent improvement, that’s our goal right now.”

The study reported improvements relating to both ‘volitional movement’ – being able to move your legs on purpose – and ‘autonomic functions’ – such as cardiovascular regulation, urination, bowel and bladder function and sexual function.

Both participants regain some leg movement

“Both participants experienced immediate return of volitional movement with eSCS,” the report says.

One of the patients, a 48-year-old who was paralysed in a motorcycle crash five years ago, found that she could voluntarily move her legs the first time the device was switched on.

She says even standing for 30 seconds at a time would change her life.

The second patient described in the study was 52 years of age and 10 years out from the fall that caused her paralysis.

Like the first patient, she was able to move her legs the first time the spinal cord stimulator was switched on.

There was minor improvement in her bowel-voiding score and no evidence that stimulation changed blood-pressure control.

Sandra is paralyzed after a motorcycle accident. But she’s moved her legs and toes thanks to some amazing technology that @UMNews and @HennepinHC are working on.

How this study is changing lives at 10 @KSTP pic.twitter.com/ExGSmc13Xv

No person in the report regained the ability to feel sensations, and neither patient is walking.

But once patients are able to make small voluntary movements thanks to eSCS, they have access to rehabilitative exercises that can make a difference in the long term, the report says.

“Our preliminary results indicate that eSCS, even in participants with long-standing injury, can immediately expand the capacity for volitional movement in participants with SCI. As such, eSCS may facilitate more significant rehabilitative therapy”, the study explains.

So basically eSCS and rehab could achieve long-term results if combined.

“We think by starting with spinal cord stimulation restoring some movement and then getting going with rehabilitation may be the best paradigm,” Dr. Darrow told the ABC’s 5 Eyewitness News.

“Although rehabilitation may play a significant role in recovery, especially in chronic SCI, these data raise questions about the relative importance and timing of intensive rehabilitation and eSCS,” the report explains.

The authors say these results give fresh hopes to a broader group of patients compared to previous studies – such as women and patients more than 10 years from injury, and / or in the fifth and sixth decade of life.

“In this report, we corroborate that eSCS can restore volitional movement and muscle activity in participants after neurologically complete SCI” the study says.

“We believe that we are studying a population that is much closer to the general population of patients with spinal cord injury,” Dr. David Darrow, said in an announcement on the early study results.

Both participants have severe SCI with less than 1 mm of residual cord at the level of the lesion and extensive myelomalacia, the report says.

“Importantly, our findings extend the generalisability of this finding to chronic SCI in females at older ages and longer intervals from injury than previously reported,” it adds.

“A limited number of highly publicised reports have shown that carefully selected male participants (and more recently, one 22-year-old woman three years from injury) with motor-complete SCI coupled with long-term intensive locomotor training can restore supraspinal control over spinal cord motor circuits through eSCS applied below the level of injury,” the report explains.

“It was suggested that intensive training may be crucial to reactivate and form new supraspinal connections that allowed for eSCS to facilitate voluntary movement, which has been strongly supported in animal studies,” it continues.

Although restoring a person’s ability to walk would be a breakthrough, restoring autonomic functions tops the priorities list for many people with paralysis, E-Stand investigators say.

“In people who have mid-thoracic injuries, the thing that comes up near the top of the list every time is actually bowel and bladder,” Dr. Ann Parr, a lead investigator with E-Stand and assistant professor of neurosurgery at the University of Minnesota told The Star Tribune.

“The autonomic nervous system regulates bladder, bowel, cardiovascular, and sexual function, and because of the loss of supraspinal connections after SCI, these systems are affected”, the report explains.

Cardiovascular functions and sexual functions were restored in one occasion, the study says.

“Surprisingly, while no changes in sensation were observed, our second participant reported restoration of sexual function with the ability to achieve orgasm,” the paper reads.

Bowel-bladder synergy improved in both participants.

“Both participants reported changes in bowel and bladder function, although the effect of these changes is indeterminate with this level of data. Participant 2 regained bowel/bladder synergy and volitional urination,” the report explains.

What is spinal cord stimulation

Epidural SCS (eSCS)— involves the surgical implantation of a small array of electrodes into the epidural space and was originally developed to manage chronic pain.

Then, it’s connected to an implantable battery.

A number of clinical experiments using transcutaneous spinal cord stimulation (tSCS) have also been published. This eliminates the dangers and costs of surgery, instead using electrodes placed on the skin over the spine. Significant recovery has been reported using this non-invasive treatment hand movement – eg: hand movement, and leg control.

SpinalCure believes this may be the best way of giving access to the benefits of SCS to a large number of people in the relatively short term.

Questions from our followers

Following our post on Facebook about this story, we have received some interesting questions. Here are the answers.

1. How does one register for the clinic trial in Australia?

For all questions about the planned neurostimulation research here in Australia, please get in touch with the UTS Centre for Neuroscience and Regenerative Medicine.

2. Waiting to see one of these articles being about where research is at in Australia? It’s always overseas progress….

It does seem that way but that’s a reflection of how much more funding for SCI research the scientists have overseas, especially in the USA.

We are trying to get both Federal and State governments to increase their funding to cure-related research, as so much of the available funds are being spent on work-related to lifestyle improvements.

But some great work is going on here in Australia.

For example A/Prof. Marc Ruitenberg from Queensland University, who we are proud to support has a clinical trial underway for newly injured people.

Neurostimulation experiments are showing remarkable results in all SCI levels.

Even in people who are seemingly “complete” (AIS A or B).

At SpinalCure we are particularly interested in the non-invasive neurostimulation techniques which Prof. V. Reggie Edgerton’s team has pioneered.

We are working very hard to raise enough funds to develop such research in Australia.

4. What about C3 C4 injury? Could it be used for regaining movements for hands and arms?

There has been some early clinical work targeting hand function.

This is after all the most desired functional return for quadriplegics.

For example this paper shows some success using non-invasive stimulation.