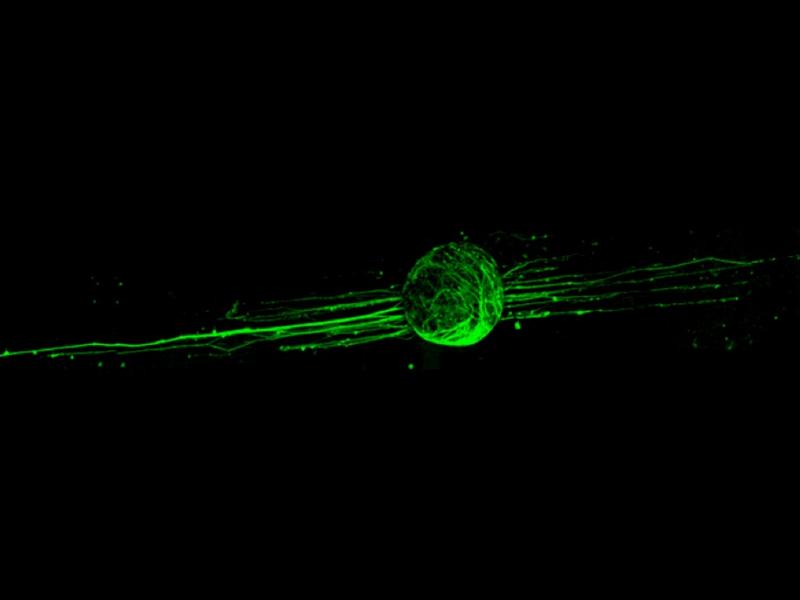 Researchers at the Rensselaer Polytechnic Institute in Troy, New York, USA, have developed a promising new biomaterial that could offer targeted treatment to the damaged spinal cord tissue, preventing further damage after the initial trauma caused by an injury.

In research published in Nature Communications, an interdisciplinary team from Rensselaer demonstrated how estrogen — a natural hormone produced in the body — can be polymerised into a slow-releasing biomaterial and applied to nervous system cells to protect those cells and even promote regeneration.

“Estrogen is known to be neuroprotective,” said Ryan Gilbert, a professor of biomedical engineering at Rensselaer and a member of the Center for Biotechnology and Interdisciplinary Studies (CBIS).

“After spinal cord injury, you have all these free radicals that are released and cause the injury to increase over time. We’re trying to stop the spread of the injury. It’s more of an acute phase treatment we are looking to develop.”

By observing nature’s methods of protection, Gilbert partnered with Edmund Palermo, an assistant professor of materials science and engineering at Rensselaer, to develop a polymer that — when implanted directly on the spinal cord — would target the injured tissue and release estrogen as a therapeutic over a period of years.

“This was the first time polyestrogen was processed into fibers that showed the ability to enhance the outgrowth of neural cells along the fiber direction without adding growth factors,” Palermo said.

The team’s new approach is now being patented and will enable the researchers to push their exploration even further toward preclinical research, where they can see how their polymerised fibers would work in a living system.

Congratulations to Tom on his huge achievement, completing the Ultra-Trail Kosciuszko 100km marathon in just over 23 hours, and for reaching his fundraising target and raising over $5,000 for SCI research. Tom set off in sub-zero temperatures and not only faced the challenging…
END_OF_DOCUMENT_TOKEN_TO_BE_REPLACED

A stunning day in Sydney for the annual LAGS Golf Day in support of SpinalCure Members of the Lloyd’s Australia insurance and underwriting community enjoyed a glorious morning on the greens at Concord Golf Club, followed by lunch in the…
END_OF_DOCUMENT_TOKEN_TO_BE_REPLACED

Thrilled to have SpinalCure community ambassador Dean Martelozzo feature as the cover story on the summer edition of Link – Australia’s premier national disability magazine. Dean became a paraplegic in 2011 as a result of a snowboarding accident in the…
END_OF_DOCUMENT_TOKEN_TO_BE_REPLACED

Sydney, 6 December 2022 Today, Comedian and Presenter Tommy Little handed over a cheque for $103,520 to Project Spark, a partnership between Neuroscience Research Australia (NeuRA), SpinalCure and Spinal Cord Injuries Australia that has the potential to improve the lives…
END_OF_DOCUMENT_TOKEN_TO_BE_REPLACED

Our heartfelt congratulations to Associate Professor Marc Ruitenberg from the University of Queensland’s School of Biomedical Sciences on being awarded a prestigious Churchill Fellowship. Dr Ruitenberg and his team are using the latest advances in single-cell and spatial sequencing technologies…
END_OF_DOCUMENT_TOKEN_TO_BE_REPLACED