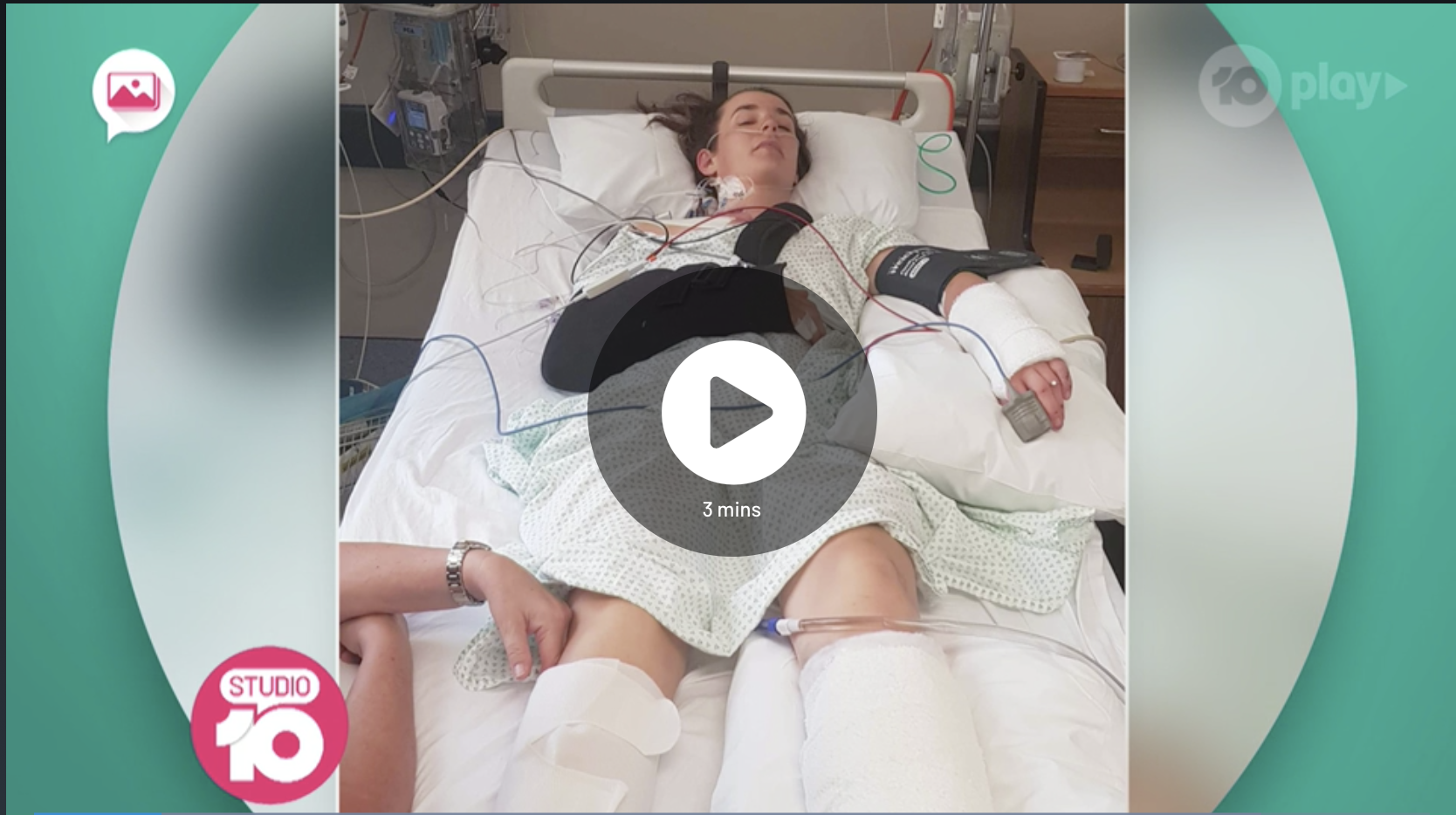 In January 2020, Emma was hiking in New Zealand when a tree branch fell on her, leaving her with 20 broken bones – skull, jaw, clavicle, humerus, six ribs, wrist, hand and ankle – as well as 3 broken vertebrae. Unfortunately, one of those vertebra had completely burst, causing pieces of bone to impact her spinal cord resulting in a spinal cord injury. The first four days that followed the injury included multiple emergency surgeries, a lot of Ketamine induced hallucinations and one beautiful ICU proposal (she said yes!).

After 2 weeks, she was stable enough to fly home to the Austin Hospital Spinal Unit in Melbourne after which she spent three months in the Royal Talbot Spinal Rehab.[/column]

The day she arrived she was hoisted from bed into a wheelchair and pushed into a room full of other patients in wheelchairs. It was the first time she processed that she had a SCI. She was so shocked that she lasted a whole five minutes before asking to go back to her room, mainly so she could cry. Some days she cried because she was sad, she’d lost her independence for even the littlest tasks, like rolling over in bed or going to the toilet, and some days it was because they gave her mash potato for the 23rd day in a row.

It wasn’t all bad though. She began to really enjoy the challenging physio and OT sessions and soon started ticking off goals to become independent again. She also made friends with other patients and their families. They were genuinely good people whose injuries were very complex.
Now that her legs are back moving and getting stronger, she feels she has to make good use of them. Come December 2020, she plans on jumping back on her bike and riding from her house in Cockatoo, Victoria, to Canberra via the hilliest route. Almost 1000 km and over 12,000 m of elevation will certainly prove a challenge. As well as just surviving this ride, her initial goal was to raise $10,000 for SpinalCure Australia – she has already surpassed this and is discussing a new goal with her team.

Our Person of Interest for August is James Gribble. We chose him because he is actively trying to improve the lives of Australians living with disabilities through his company Empower Golf. Below he shares how he came to be involved…
END_OF_DOCUMENT_TOKEN_TO_BE_REPLACED

Led by Dr Allan Dietz at the Mayo Clinic, this clinical trial will investigate the safety and potential therapeutic effects of mesenchymal stem cells derived from the patients own adipose tissue (body fat). Eligible participants include those with sub-acute or…
END_OF_DOCUMENT_TOKEN_TO_BE_REPLACED

SpinalCure Ambassador talks about her journey and her hopes for the future.  She is joined by Prof Sylvia Gustin who recently received $2.5million from the $15m SCI research fund that SpinalCure secured in the 2019/20 NSW state budget. Prof Gustin…
END_OF_DOCUMENT_TOKEN_TO_BE_REPLACED

Prior case studies have shown that synchronised stimulation of the brain and limb nerves strengthens neural connections and, thus, can restore patients’ mobility. Now, researchers at the BioMag Laboratory in Helsinki, Sweden have, for the first time, looked into the…
END_OF_DOCUMENT_TOKEN_TO_BE_REPLACED