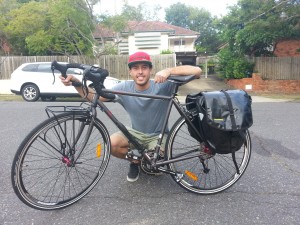 Not your average weekend cycle ride! In June 2014 Xander Beccari cycled from Brisbane to Wollongong — a journey of over 1000km — to raise funds for spinal cord injury research.

Xander explains, “One of my good friends was injured in a snowboarding accident in France three years ago. … Unfortunately he was left paralysed from the waist down. It obviously had a huge impact on his life…. Since then, he has held quite an optimistic outlook that one day through medical research he will be able to walk again. Actually when I told him about this adventure/fundraiser his response was ‘well hopefully the money can help and then on the next ride, I’ll have to come with you!’.”

After 2 weeks on the road, camping each night in the tiny pup tent he carried with him, he arrived at the North Wollongong Hotel on Sunday 6th July to loud cheers from friends and supporters. He actually arrived twice—re-encacting the triumphant arrival for WIN television cameras!

Celebrations continued throughout the afternoon and evening with live music and a raffle which added to the fabulous total raised.

You can still show your support for Xander: sponsor Xander on Everyday Hero and get in touch on Facebook xandercycle4spinalcure

Congratulations to Tom on his huge achievement, completing the Ultra-Trail Kosciuszko 100km marathon in just over 23 hours, and for reaching his fundraising target and raising over $5,000 for SCI research. Tom set off in sub-zero temperatures and not only faced the challenging…
END_OF_DOCUMENT_TOKEN_TO_BE_REPLACED

A stunning day in Sydney for the annual LAGS Golf Day in support of SpinalCure Members of the Lloyd’s Australia insurance and underwriting community enjoyed a glorious morning on the greens at Concord Golf Club, followed by lunch in the…
END_OF_DOCUMENT_TOKEN_TO_BE_REPLACED

Thrilled to have SpinalCure community ambassador Dean Martelozzo feature as the cover story on the summer edition of Link – Australia’s premier national disability magazine. Dean became a paraplegic in 2011 as a result of a snowboarding accident in the…
END_OF_DOCUMENT_TOKEN_TO_BE_REPLACED

Sydney, 6 December 2022 Today, Comedian and Presenter Tommy Little handed over a cheque for $103,520 to Project Spark, a partnership between Neuroscience Research Australia (NeuRA), SpinalCure and Spinal Cord Injuries Australia that has the potential to improve the lives…
END_OF_DOCUMENT_TOKEN_TO_BE_REPLACED

Our heartfelt congratulations to Associate Professor Marc Ruitenberg from the University of Queensland’s School of Biomedical Sciences on being awarded a prestigious Churchill Fellowship. Dr Ruitenberg and his team are using the latest advances in single-cell and spatial sequencing technologies…
END_OF_DOCUMENT_TOKEN_TO_BE_REPLACED