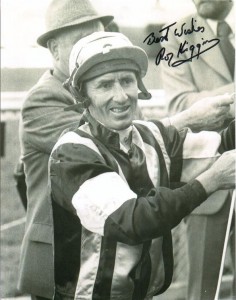 Everybody at Spinal Cure Australia is saddened by the passing of Roy Higgins MBE, champion Australian jockey and one of the legendarycharacters of the turf. Our sincere condolences go to his family and friends and we are deeply sorry for their loss.

His record is surpassed by none with 2312 wins, 2 Melbourne cups in 1965 and 1967, 2 Golden Slippers, 11 Victorian Jockeys Premierships and a winner of every major race ever run in Australia, in his 30 year career, he retired in 1982. Since his retirement he works mainly in radio and television as a racing commentator. He was awarded an MBE in 1972 by Queen Elizabeth for services to the racing industry.

Roy also has had many falls during his career and has suffered fractures in his spine, fortunately with no spinal cord damage. As a proud Spinal Cord Australia ambassador Roy was acutely aware of the many people that suffer from spinal cord injuries and has participated in previous fundraising activities for spinal cord research. He was particularly helpful to me in 2003 when he fronted a TV campaign for a fundraiser held at the Flemington racecourse, Celebrity Shirts for Spinal Cord Research and he donated several items to be auctioned. I would often see him at the races with my father and he would always make time to talk to us with a firm handshake and a happy smile. Rest in Peace Roy, you will always be a champion bloke and many will miss you.

Congratulations to Tom on his huge achievement, completing the Ultra-Trail Kosciuszko 100km marathon in just over 23 hours, and for reaching his fundraising target and raising over $5,000 for SCI research. Tom set off in sub-zero temperatures and not only faced the challenging…
END_OF_DOCUMENT_TOKEN_TO_BE_REPLACED

A stunning day in Sydney for the annual LAGS Golf Day in support of SpinalCure Members of the Lloyd’s Australia insurance and underwriting community enjoyed a glorious morning on the greens at Concord Golf Club, followed by lunch in the…
END_OF_DOCUMENT_TOKEN_TO_BE_REPLACED

Thrilled to have SpinalCure community ambassador Dean Martelozzo feature as the cover story on the summer edition of Link – Australia’s premier national disability magazine. Dean became a paraplegic in 2011 as a result of a snowboarding accident in the…
END_OF_DOCUMENT_TOKEN_TO_BE_REPLACED

Sydney, 6 December 2022 Today, Comedian and Presenter Tommy Little handed over a cheque for $103,520 to Project Spark, a partnership between Neuroscience Research Australia (NeuRA), SpinalCure and Spinal Cord Injuries Australia that has the potential to improve the lives…
END_OF_DOCUMENT_TOKEN_TO_BE_REPLACED

Our heartfelt congratulations to Associate Professor Marc Ruitenberg from the University of Queensland’s School of Biomedical Sciences on being awarded a prestigious Churchill Fellowship. Dr Ruitenberg and his team are using the latest advances in single-cell and spatial sequencing technologies…
END_OF_DOCUMENT_TOKEN_TO_BE_REPLACED