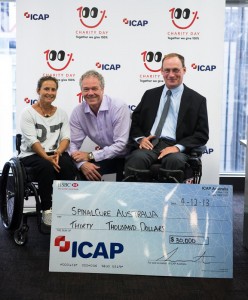 Each year the ICAP offices around the world dedicate a full day of trading to charity. Since its inception, 21 years ago, ICAP Charity Day has raised over a staggering A$200 million!

SpinalCure is honoured to have been included in the role of beneficiaries for the 2013 Charity Day on 4th December. Arriving at the ICAP office in Sydney brought an instant grin to ones face… a smile that stayed firmly in place for the entire day! Each trading team, dealing with such things as interest rates or currency trades, chooses a fancy dress theme for the day which they follow through to the decoration of their section of the office. So on entering the bustle of the office you are accosted by green toy soldiers, crash dummies and characters from the likes of the Flintstones and Game of Thrones!

Ambassadors for charities involved actually man the phones, enabling trades valued in the tens and hundreds of millions!

In February, SpinalCure’s Duncan Wallace and Merilyn Bullen, along with SpinalCure supporters Cameron and Sam Bloom, visited ICAP’s offices again and were presented with a giant cheque for the huge sum of $30,000!

Thank you ICAP for taking us one step closer to the cure!

SpinalCure Australia would like to thank Lloyd’s Australia for hosting their sixth  annual charity Golf Day on Thursday 11 March, 2021 at Sydney’s Concord Golf Club. Participants generously helped raise $28,602 which will be invested to help find a cure…
END_OF_DOCUMENT_TOKEN_TO_BE_REPLACED

This video summarises the findings of research by A/Prof Marc Ruitenberg and his team, into leukocyte fluctuations in traumatic spinal cord injury. The published paper provides the first detailed description as to how the nature and level of a spinal…
END_OF_DOCUMENT_TOKEN_TO_BE_REPLACED

A message from Naomi Watts

The star of the movie Penguin Bloom, Naomi Watts has very kindly taken the time to record a message for us.
END_OF_DOCUMENT_TOKEN_TO_BE_REPLACED

To be released in Australian cinemas 21st January 2021 and streaming on Netflix in the USA and Europe. Penguin Bloom tells the true story of SpinalCure Ambassador Sam Bloom (played by Academy Award® nominated Naomi Watts) a young mother whose…
END_OF_DOCUMENT_TOKEN_TO_BE_REPLACED

Spinal cord injuries cost Australian economy $74.5b but small investments could reverse the emotional and financial impact. Sydney, 15 December 2020: A new landmark report released today by AlphaBeta, commissioned by SpinalCure Australia and supported by a grant from the icare Foundation (Insurance…
END_OF_DOCUMENT_TOKEN_TO_BE_REPLACED