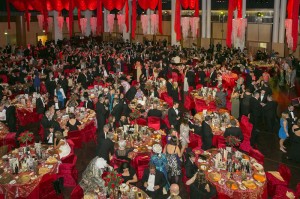 Each year the journalists from the Federal Parliamentary Press Gallery and the politicians they cover, get together for a black tie knees-up, The Midwinter Ball, before Parliament takes its winter break.

Fundraising aspects of the night included the auctioning of such things as dinner with Prime Minister Julia Gillard which fetched an impressive $12,600—narrowly beaten for top honours by the $13,000 bid for dinner with senior Liberals Julie Bishop and Malcolm Turnbull. An unknown bidder spent $4050 to be able to keep warm in a scarf knitted by Ms Gillard!

This year the Midwinter Ball raised funds for six charities including, wonderfully, SpinalCure. On 24 July SpinalCure Director Duncan Adams and CEO Duncan Wallace visited Parliament House in Canberra, for the presentation of the donations. 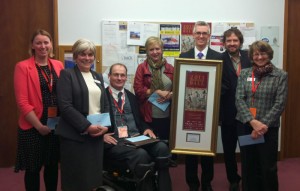 Crisp winter sunshine shone on Parliament House lighting the spectacular view from the forecourt, across the lake, to the War Memorial and Mt Ainslie beyond. Even though Parliament was on it’s break the halls were still busy with several school outings and other visitors.
Representatives from the charities were met by David Speers, President of the Press Gallery, along with Katherine Morrell and Paul Donahue from BDW Special Events, the organisers of the Midwinter Ball. Once signed in they were led through to the press offices. Here, high on the wall, is an unobtrusive white button. David Speers reached up to push it, sounding a bell which caused journalists to pour out of their offices to find out what important announcement was about to be made – most no doubt hoping that a date had been set for the election! With the Press Gallery gathered, Mr Speers presented cheques to each of the charities so generously supported by the 2013 Midwinter Ball.

Our heartfelt thanks go to all at the Federal Parliamentary Press Gallery.

Our Person of Interest for August is James Gribble. We chose him because he is actively trying to improve the lives of Australians living with disabilities through his company Empower Golf. Below he shares how he came to be involved…
END_OF_DOCUMENT_TOKEN_TO_BE_REPLACED

Led by Dr Allan Dietz at the Mayo Clinic, this clinical trial will investigate the safety and potential therapeutic effects of mesenchymal stem cells derived from the patients own adipose tissue (body fat). Eligible participants include those with sub-acute or…
END_OF_DOCUMENT_TOKEN_TO_BE_REPLACED

SpinalCure Ambassador talks about her journey and her hopes for the future.  She is joined by Prof Sylvia Gustin who recently received $2.5million from the $15m SCI research fund that SpinalCure secured in the 2019/20 NSW state budget. Prof Gustin…
END_OF_DOCUMENT_TOKEN_TO_BE_REPLACED

Prior case studies have shown that synchronised stimulation of the brain and limb nerves strengthens neural connections and, thus, can restore patients’ mobility. Now, researchers at the BioMag Laboratory in Helsinki, Sweden have, for the first time, looked into the…
END_OF_DOCUMENT_TOKEN_TO_BE_REPLACED