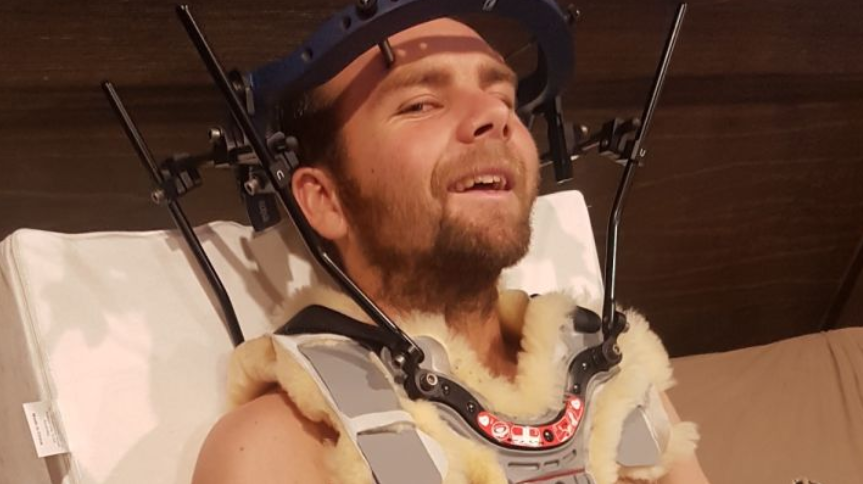 “I almost became paralysed, I realised how lucky I am and so I wanted to give back”

Ace Lee Hamann, 27, from Sydney, was out with friends in Surry Hills in Sydney one night in April last year when he climbed a tree, fell from about 20 feet and fractured his neck, knee and foot.

“I fractured my C1, the top vertebrae. When I was in the hospital, the doctors told me I was very lucky to fall straight on my head. If I fell a millimetre to the left or to the right, I could have been paralysed or dead,” Ace said.

Fifteen months later Ace has almost fully recovered but he says the experience was a huge eye-opener into spinal cord injuries and how they can change people’s lives.

“I felt like I got off pretty lightly and I’m able to walk again while there are a lot of people who are in much worse situations. So I just wanted to give back a bit; I wanted to help out others as much as I could”.

During his recovery, Ace planned an ‘Ace-a-thon’ which was a challenge he set himself consisting of a 30km bike ride to Garie Beach on the south coast, followed by a 16km stand-up paddleboard to Bundeena and then a 3km swim back into South Cronulla.

“This took place in February 2019 and I was accompanied by my brother Westly and it was a great success,” said Ace.

“Months later I decided to do this challenge again to try to raise some money. Again Westly joined me and we managed to raise almost $3,000 and on  August 24 we successfully completed it again — despite the freezing cold winds and water.

People that donated to Ace’s GoFundMe campaign were mostly friends, clients, colleagues, who found out about it through Facebook, Instagram, email or word of mouth.

The fundraiser, which is still live on GoFundMe, has raised almost $3000, which Ace donated entirely to SpinalCure Australia.

Thank you so much, Ace and all the best with your recovery!!

We need your help. SpinalCure Australia relies on donations and fundraisers like this to continue to fund life-changing medical research towards a cure for spinal cord injury. Have you been thinking about helping out?

Join our incredible community of fundraisers! From bike rides, to bake sales, mountain climbs to morning teas, there are endless ways to raise money. Here is how.

Sydney, 6 December 2022 Today, Comedian and Presenter Tommy Little handed over a cheque for $103,520 to Project Spark, a partnership between Neuroscience Research Australia (NeuRA), SpinalCure and Spinal Cord Injuries Australia that has the potential to improve the lives…
END_OF_DOCUMENT_TOKEN_TO_BE_REPLACED

Our heartfelt congratulations to Associate Professor Marc Ruitenberg from the University of Queensland’s School of Biomedical Sciences on being awarded a prestigious Churchill Fellowship. Dr Ruitenberg and his team are using the latest advances in single-cell and spatial sequencing technologies…
END_OF_DOCUMENT_TOKEN_TO_BE_REPLACED

SpinalCure Australia is delighted to award four small grants to spinal cord injury (SCI) researchers to assist with their career development and research advancement. The support for these researchers was made possible thanks to a generous bequest by the late…
END_OF_DOCUMENT_TOKEN_TO_BE_REPLACED